I am usually off on one tangent or another, suddenly becoming mildly obsessed with a particular subject and wanting to read what I can find on it and usually buying several books on the subject.  But reading plans can change as swiftly as they come, a moody or changeable reader (or one with too many interests, like myself) can find themselves abandoning the settled plan and instead of diligently setting forth on an in-depth study of say, Medieval architecture, Arthurian legends, or the Pre-Raphaelites or whatever; one can end up reading something quite different and often much less intellectual.
I've recently read of other readers lately who have tried to stick with a reading plan and ended up leaving it.  I suppose when we set ourselves a reading list to follow, it becomes a bit like a task and we don't like to feel tied down to forcing ourselves to read something, especially when that changeableness comes on.

The summer before last, I wanted to dip my toe into British archaeology, make a light study of chalk hill figures, stone circles, and continue reading more folklore and country books.  This all tied in with some paintings I was doing and an idea for a music project.  I had previously read John Aubrey's Natural History of Wiltshire and Stuart Piggott's books on William Stukeley and Antiquaries and other books over time. This was the stack of books I meant to read: 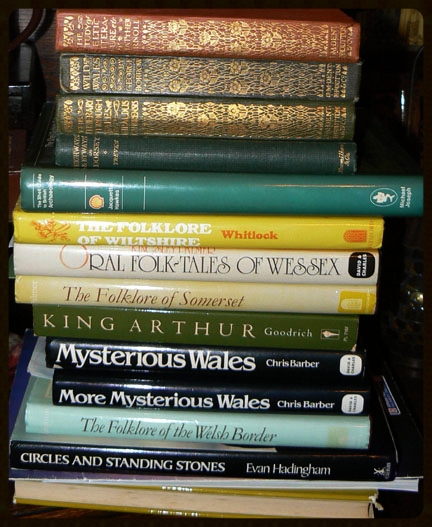 I even bought some more books to go along with these, but apart from the West Country folklore books,  I didn't get very far and ended up reading very different books.   This year one plan of mine was to read about the bohemian Bloomsbury set, particularly Vanessa Bell, who I think was an extremely interesting artistic woman.  This is my collection of Bloomsbury and related titles, which I will go into in more depth at a later time: 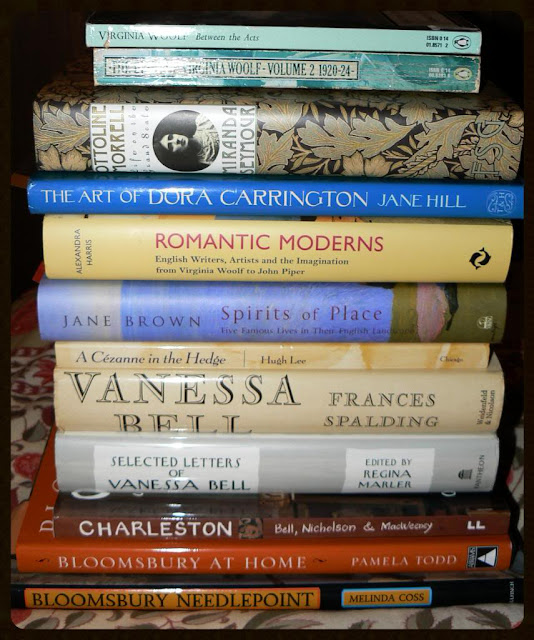 I had previously read 'Bloomsbury At Home' by Pamela Todd, and last summer the utterly wonderful 'Romantic Moderns' by Alexandra Harris; but apart from browsing through the other books, I haven't even begun to read them!  Most of my reading time this year has been in vintage fiction, and I've been getting through a lot more books this year than normal.  But now at this time I am reading the wonderful 'Albion: A Guide To Legendary Britain' by Jennifer Westwood, which fits in with that earlier list, but I confess that I feel guilty that I have not been reading history as much as I should and feel a poor scholar for not having more discipline in continuing my personal studies of history; medieval history being a great interest to me.  When I constantly see those shelves of books, so many of them still to read, I feel I've been too lazy.  I get very excited over history books and one of my favourite bookish things to do is to explore the bibliographic sources in the back of books, which is very interesting and can set you off onto lots of other, older books on a subject.
So I am striving to be more scholarly in my reading, and while I don't promise to follow a set plan, I do intend to carry on with being more disciplined in getting a certain amount of history reading in.  It has been fun to just wander and read lots of fun books too though (like vintage Puffins), and I will still do that.
I would be interested to hear of others and their view on reading plans, so do please comment.
(By the way, do visit my companion Music blog over here:
http://folkrockmusicalbox.blogspot.com/
for some good music featured, if you like that sort of thing)
Posted by Lori at 23:46 6 comments:

The Midnight Folk by John Masefield 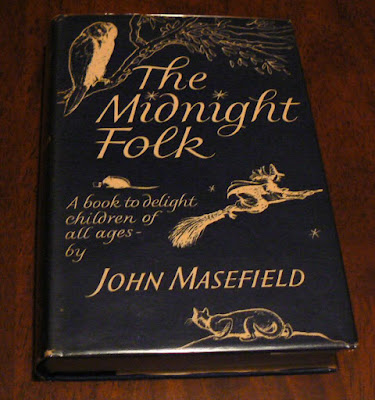 No doubt there are many of you that have heard of  'The Box Of Delights' by John Masefield; if not from reading the book, then through watching the utterly wonderful 1980s television adaptation.  This is a book I've wanted to read for years, but wanted an attractive hardcover edition for my library.  The Folio Society has produced a beautiful edition of this and the preceding book 'The Midnight Folk', from 1927.   I've had my eye on those but when looking at them more in-depth, found that even though the cover designs are wonderful and striking, I wasn't overly keen on the inside illustrations, so went searching for an older hardcover of 'The Midnight Folk' and found the perfect one (shown above).  This edition must be somewhat rare as it's the only one I found on the internet.  It is from The Reprint Society, London, 1957, with illustrations by Rowland Hilder;  I'm delighted with it and the beautiful cover art and design in dark cream on midnight blue.

This story is a delight, as we follow young Master Kay Harker on a fantastical jumble of adventures and alternate realities and to secret worlds (involving a search for lost treasure); where animals (and toys) talk and interact with Kay, people are not what they seem, and magical journeys occur.  We clamber into hiding places and spy on wicked witches and scheming villains.  Portraits speak and landscape paintings move.  Poor Kay has much to endure with his beastly governess Sylvia Daisy (who obviously doesn't like children).   The inside flap of the dustjacket  gives this description of the tale within:

"Kay Harker lives in a big house with his governess, Jane the cook, Ellen the maid, and Nibbins the black cat.  Nibbins is one of the family of the Midnight Folk.  So too is Bitem the Fox, Blinky the Owl, Rat, Otter and a whole tribe of other friends, bears, dogs, rabbits, cats and horses, all of them Kay's toys. Kay is bent on discovering the long-lost Harker treasure.  With the help of the Midnight Folk he makes nightly investigations into the mystery which lead him into all kinds of marvellous  adventures.  Sometimes Kay is convinced that he is dreaming, but at other times there is proof that his midnight wanderings in search of clues are no fantasy but actual fact."

Here is a passage from Kay's first night of adventures:

"Kay slipped on his slippers and followed Nibbins into the little passage:  Nibbins closed the door behind him and bolted it.  "I'll lead the way," he said.  "Mind the stairs:  they're a bit worn; for the smugglers used to use these passages.  But there's lots of light.  Take my paw, as up we go."  They went up some stairs in the thickness of the wall; then a panel slid up in front of them and they came out on to the top landing.  Nibbins closed the panel behind them.  It was dark night there on the landing, except for a little moonlight.  The house was very still, but looking down over the banisters into the hall, Kay thought that he saw a shadow, wearing a ruff and a long sword, standing in the moonlight.  The cuckoo-clock in the nursery struck twelve.  "All the house is sound asleep," Nibbins said.  "Jane and Ellen are in there in those two rooms.  They little know what goes on among us midnight folk.  Give us a hand with this ringbolt, will you?"  In the oak planks of the floor there was a trap-door, which Kay had never seen before.  Together they pulled it up:  beneath was a ladder leading down to a passage brightly lit like the other...
There were seven old witches in tall black hats and long scarlet cloaks sitting round the table at a very good supper..."

Fortunately, as in the best books, the baddies are defeated and all turns out well and happy; which includes the arrival of the lovely Caroline Louisa, who we will hear more from in the next story, 'The Box of Delights.'

This book was a splendid read, sometimes there was so much going on that it could be bewildering, and I think that some of the terms and references might be difficult for younger readers today, unless they are very mature and well-read and read more old-fashioned books.  The old-fashionedness of it is one of its great charms, and what drew me in to seek it out.  This is a book that I simply didn't want to end.