September's reading for me this year was full of vintage fiction, mainly crime fiction; just getting a bit lost in stories after a rather stressful time around the middle of the month.   I finished John Bude's excellent, 'The Cornish Coast Murder' and then went on to 'Appleby's Answer' by the ever-witty Michael Innes (a most unusual mystery indeed).  Then onto the next three selections: 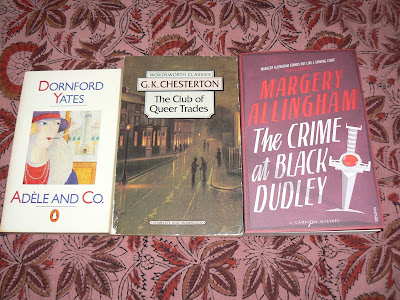 Firstly there was 'Adele And Co.' from 1931 by Dornford Yates. Dornford Yates has become a favourite author of mine within the last two years, and this was his fourth book I've read, I'm collecting them. He was very popular in his time, but is not too well known these days. "Here is a superior blend of excitement, drama, danger, intrigue and nostalgia... When Jill, Duchess of Padua, had her priceless pearls stolen, along with Adele and Daphne's jewels (and Berry's cufflinks), Berry and Co. face an impossible task in their attempt to recover them-particularly when they discover that Auntie Emma, a ruthless professional criminal, hopes to beat them to it. Throwing caution to the wind, Berry, Jonah and Boy embark on a thrilling chase which takes them from Paris to the Pyrenees..." This is an amazing book with lots of humour (Berry is so very funny), following on from 'Berry and Co.' and 'Jonah and Co.'

After that incredible adventure, the next choice was 'The Club of Queer Trades' from 1905 by the great G.K. Chesterton, an incredibly entertaining and eccentric little book consisting of six short stories filled with mystery, humour, and intrigue. "Eccentric sleuth, Basil Grant is deftly portrayed by Chesterton: mystic, enigmatic and often considered mad by his brother Rupert-the over-zealous private-eye- and by Charles Swinburne, gullible narrator of the six tales... Like Chesterton's more famous hero, Father Brown, Basil Grant detects crime by intuitive rather than conventional means." I enjoyed this one tremendously and some bits were very funny, and I need to get many more G.K. Chesterton books; he was a writer of great wit and wisdom.

The third book of that particular week that I found hard to put down, was 'The Crime At Black Dudley' from 1929 by Margery Allingham, her first mystery to feature Albert Campion. This one concerns a house party of bright young things gathered in a remote, ancient house full of secret passages, who become trapped in the house by a gang of ruthless criminals. Try this if you are in the mood for a great vintage Golden Age crime classic. Vintage Books has republished Margery Allingham's books in an attractive softcover edition and, after buying three of them, I'd like to get them all in that edition.

It had been years since I'd read one of her books, and I enjoyed 'The Crime At Black Dudley so much that it was followed by another Margery Allingham one,  'Look To The Lady', which I'll finish reading in a day or so, another great one from a great mystery writer; and they are best read in order to get the most out of them.
Posted by Lori at 23:50 14 comments: