Gilbert and Sullivan: The Savoy Operas 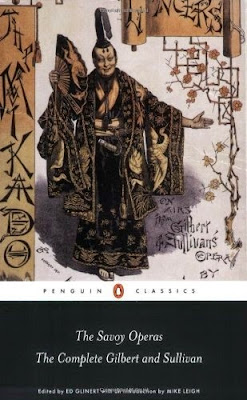 If you fancy reading something amusing, frivolous, and entertaining; something that will take you away from the tatty and mundane entertainments of the 21st century, then here is an antidote to those dull, unimaginative ways of passing the book- perusing time.  This attractive Penguin Classics edition contains the complete librettos written by W.S. Gilbert, and it is quite a thick and substantial tome (with a profusion of historical notes).  There is enough here to keep you busy reading for some time, and of course, it is likely to send you hunting out the music as well.  This is often viewed as light-weight material. Yes, there is much silliness and ridiculously shallow and fickle characters, but there is also more going on in these tremendously witty Victorian comic operas than is often realised; and that makes them very interesting.  Here is the description on the back of the book:

"Life's a pudding full of plums:


Together, librettist W.S. Gilbert and composer Arthur Sullivan created some of the best-loved musical works in the world, with a finely honed yet anarchic sensibility that found its expression in upturned logic and extravagant wordplay.  This collection brings together all of their operatic collaborations, from their first joint venture, Thespis, the music of which is now largely lost, to the triumphant comic romps of The Pirates of Penzance and The Mikado, to less frequently performed gems such as the fanciful The Sorcerer and the acerbic lampoon Patience.  The fourteen Savoy Operas show Gilbert as a great poet and well as a humourist, and illustrations from his Bab Ballads reveal an entertaining comic artist.  The introduction by Mike Leigh explores the often conflicting characters of the two men, and the style, techniques and impact of the operas."

This is particularly timely, as Mike Leigh is in the midst of his production of The Pirates of Penzance at the English National Opera, and there is also a wonderful new music project that I will be focussing on here as well, in the next instalment.
I particularly enjoyed reading 'The Pirates of Penzance' (and how incredibly brilliant 'I Am The Very Model Of A Modern Major-General' is!), 'Patience', and 'The Gondoliers'.

The G&S operas are: 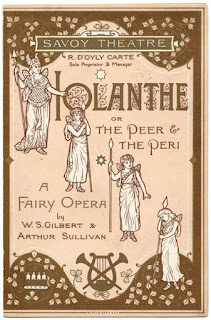 This blog could be very lengthy, with quotes from every opera, but we will just look at a few examples. In 'Patience', we have a satirical take on Oscar Wilde, or possibly Swinburne (in Reginald Bunthorne, the soppy poet), the Aesthetic Movement, and The Pre-Raphaelite Brotherhood.  In 'Am I Alone', Bunthorne hypocritically declares:

Am I alone, and unobserved? I am 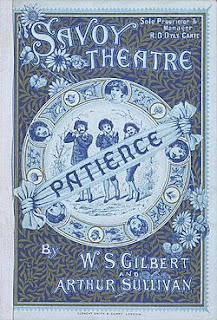 Then let me own I'm an aesthetic sham!
This air severe is but a mere Veneer!
This cynic smile is but a wile of guile!
This costume chaste is but good taste Misplaced!
Let me confess!
A languid love for lilies does not blight me!
Lank limbs and haggard cheeks do not delight me!
I do not care for dirty greens by any means.
I do not long for all one sees that's Japanese.
I am not fond of uttering platitudes
In stained-glass attitudes.
In short, my mediaevalism's affectation,
Born of a morbid love of admiration!

There are also some Dragoons who, out of frustration to attract the attention of the females, decide to pretend to adopt the excessively poetic attitude to impress the girls, who have become smitten by the poetic aesthetes. They attempt to put on an act, as in this song (which is sung with much attitude and posing):

It's clear that mediaeval art alone retains its zest,
To charm and please its devotees we've done our little best.
We're not quite sure if all we do has the Early English ring;
But, as far as we can judge, it's something like this sort of thing:
You hold yourself like this,
You hold yourself like that,
By hook and crook you try to look both angular and flat.
We venture to expect
That what we recollect,
Though but a part of true High Art, will have its due effect.

If this is not exactly right, we hope you won't upbraid;
You can't get high Aesthetic tastes, like trousers, ready made.
True views on Mediaevalism Time alone will bring,
But, as far as we can judge, it's something like this sort of thing:
You hold yourself like this,
You hold yourself like that,
By hook and crook you try to look both angular and flat.
To cultivate the trim
Rigidity of limb;
You ought to get a Marionette, and form your style on him. 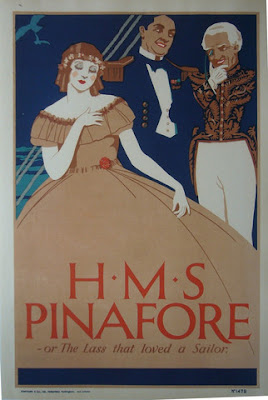 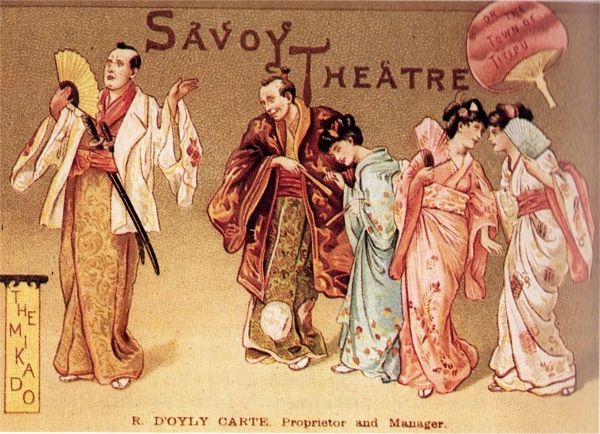 The madness of 'The Mikado':

Our great Mikado, virtuous man,
When he to rule our land began,
Resolved to try
A plan whereby
Young men might best be steadied.
So he decreed, in words succinct,
That all who flirted, leered or winked
(Unless connubially linked),
Should forthwith be beheaded. 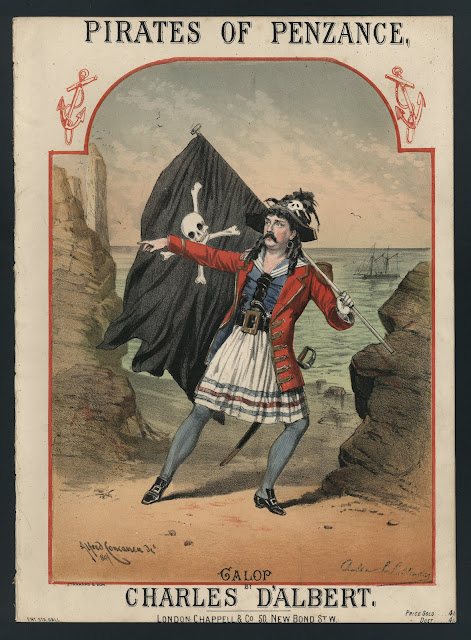 From 'The Sorcerer':
Oh! My name is John Wellington Wells,
I'm a dealer in magic and spells,
In blessings and curses and ever-filled purses,
In prophecies, witches and knells.
If you want a proud foe to 'make tracks'-
If you'd melt a rich uncle in wax-
You've but to look in on our resident Djinn,
Number seventy, Simmery Axe!
We've a first class assortment of magic;
And for raising a posthumous shade
With effects that are comic or tragic,
There's no cheaper house in the trade.
Love-philtre- we've quantities of it;
And for knowledge if any one burns,
We keep an extremely small prophet, a prophet
Who brings us unbounded returns:

For he can prophesy
With a wink of his eye,
Peep with security into futurity,
Sum up your history,
Clear up a mystery,
Humour proclivity
For a nativity- for a nativity;
With mirrors so magical,
Tetrapods tragical,
Bogies spectacular,
Answers oracular,
Facts astronomical,
Solemn or comical,
And, if you want it, he
Makes a reduction on taking a quantity... 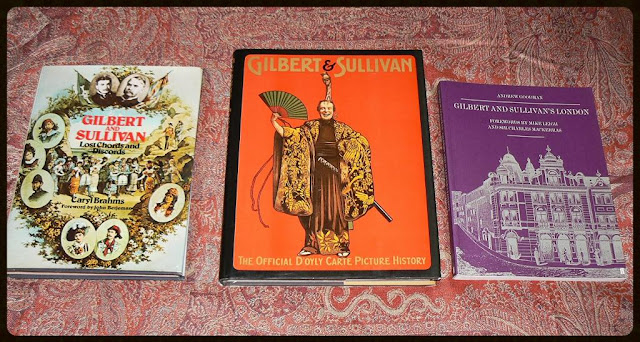 From the description of 'Gilbert and Sullivan, Lost Chords and Discords':   "The Gilbert and Sullivan operas were a phenomena in their own time and have lost none of their immense popularity since...the first opera was produced...in 1875.  But behind the triumph of successive first nights lay a stormy partnership between two Victorian giants, whose conflicting aspirations often came close to wrecking the collaboration. In a sparkling and witty biography, Caryl Brahms contrasts the lives and characters of the two gifted men:  The quarrelsome but kindhearted Gilbert, mocking with tongue and pen the follies of the era, and the gentle, charming Sullivan, revelling in the life of high society but resentful that his comic operas won more fame than his oratorios.  For although it was the Savoy operas which made their fortune, both Gilbert and Sullivan thought themselves overshadowed by the other and believed that their best work had been achieved alone.  Only the clever management of the wily impresario, D'Oyly Carte, held them together for twenty-five years and fourteen operas."  This book also is full of gorgeous original illustrations, though it seems this book is rather looked on with disdain by some for inaccuracies and embroidering of the truth, but as I'm no expert I couldn't say.

The middle book is a fascinating feast of images, packed full of photographs and illustrations from the posters, programmes, costume designs, etc...over the years, a lavish scrapbook.

In 'Gilbert and Sullivan's London':  "By moving in and around London, backwards and forwards in time, Andrew Goodman unfolds the story of the most astonishing partnership in the history of British musical entertainments against the authentic background of the era in which it flourished.  With much original research and many hitherto unpublished illustrations, Andrew Goodman makes an invaluable contribution to our knowledge, understanding and appreciation of Gilbert and Sullivan in this handsome volume, which is already a classic of its kind.  The book summons up a bygone era in a predominately celebratory tone, recalling the lost grandeur of the city's great entertainment palaces, its atmospheric streetlife and nightlife, its splendour and its squalor."

One could continue on sharing clever verse after clever verse (my book has many bookmarks in it), but perhaps you will be tempted to seek this out for yourself.  I definitely recommend it.  As for the music, it is lovely, though I haven't fully explored it all yet- dipping into it here and there, though some of the operatic singing can be a bit much in places if, like me, you aren't used to it.

*More books have followed the ones above since this was posted!
Posted by Lori at 00:52 4 comments: