Being so neglectful with posting recently, I'm posting two at once to make up for it.  The subject of this one is on some recent book presents for my birthday, ones I'd been wanting for awhile and was very glad to get them!
We will begin with this new Pook Press facsimile edition of Walter Crane's exquisitely illustrated 'A Floral Fantasy In An Old English Garden' from 1899. This is a beautiful book, the cover alone is very lovely.  I read it in no time, but it is one to return to again. 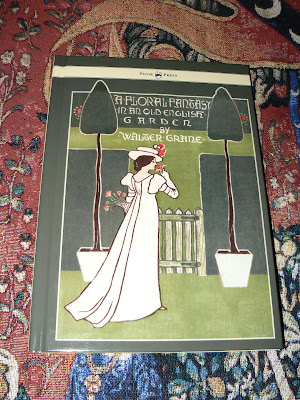 Fiona MacCarthy's big, fascinating-looking tome on the great artist Edward Burne-Jones, one of my favourite artists, and although I have other biographies about him, this is surely the ultimate Burne-Jones biography.  I was browsing through it and lost track of time. 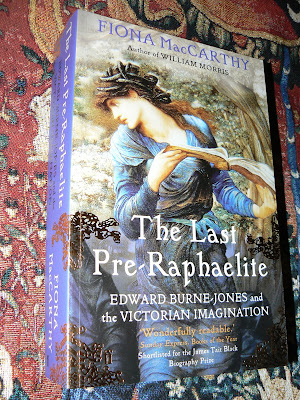 'The Faerie Handbook', a newly published book that is absolutely stunning, packed with such beautiful art and images, one I couldn't wait to own, and all romantics (particularly romantic females) should have. "The Faerie Handbook is for all those fairy lovers who want a delicious escape, who see that old-world oak with its moss-grown trunk, who love to read poetry and sip herbal tea on a fainting couch on a rainy afternoon in front of a fire, or walk in long dresses over dewy lawns, feeling the wet grass on their feet and watching the light break over the landscape. This is a book that is meant to stir up childhood wonders..." (from the Introduction). A gorgeous book that I'm in the midst of reading and poring over the splendid images. 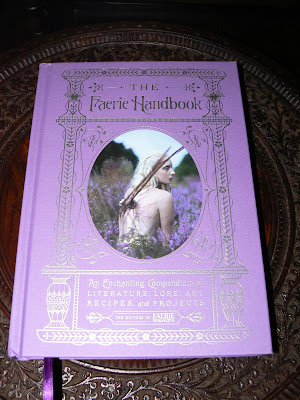 This is Susan Hill's 2017 companion book to her 'Howard's End Is On The Landing' from nearly a decade ago. It is a hodge-podge of her recollections and opinions on literature, life and literary figures. As with 'Howards...' this one was read through quickly and there are many topics of interest. 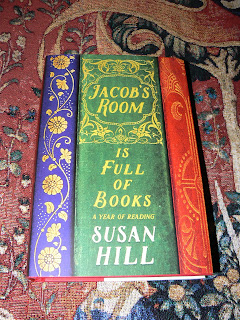 G.K. Chesterton's imaginative fiction stories are rich, fascinating, and sometimes fantastical, and just irresistible to me; though I've not read many yet and in the past was only familiar with his Father Brown mysteries, and need to explore his wise non-fiction too, he had tremendous common sense about the world, and you just know when a character is expressing Chesterton's views.
'The Return of Don Quixote' from 1927 is one that attracted me very much:

"Michael Herne is a librarian at Seawood Abbey, an estate owned by Lord Seawood. When Lord Seawood's daughter and some of her friends want to put on a play called "Blondel the Troubadour," the librarian is asked to play the part of a medieval king. Herne not only takes his role seriously by thoroughly researching the Middle Ages, when the play is concluded, he refuses to take off the costume. He remains in character, much to the befuddlement and consternation of the other players. With this device, Chesterton achieves a wonderful effect in contrast to the typical snide modern commentary on the past: he creates an opportunity for the past to offer a commentary on the present. Herne looks at his old clothes, that is, the modern clothes he once wore, with embarrassment. The modern world is embarrassing. It takes a previous age to see that."

There is a lot more going on in this book than in that description, it's a very unusual and complex story and leaves one pondering with a haunting feeling over everything that occurred within. I was expecting it to be more lighthearted than it was, Chesterton presents some serious theories about life and society, and all the characters undergo great changes. There was an unfortunate word used a few times early in the book, but one must expect that sometimes in older books, and I can't abide this trend where people go around apologising for things in books from decades or centuries ago (there is generally more to be offended at in new books) and judging them with contemporary views.  Those that cannot think outside their own time should either leave old books alone or else read them, learn history and broaden their horizons, and develop a sense of proportion. 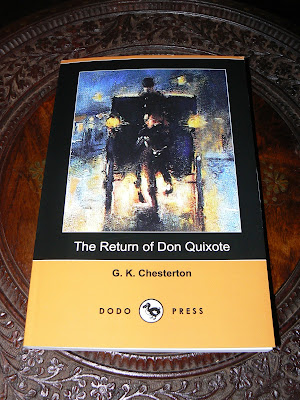 The character of Olive Ashley interested me from the beginning, as I identified with her pre-occupation with past times, the beauty and depth of art, her Romanticism and spiritual nature:

"What I mean," she said, resuming the subject of microscopes, "is that all your science and modern stuff has only made things ugly, and people ugly as well.  I don't want to look down a microscope any more than down a drain.  You only see a lot of horrid little things crawling about.  I don't want to look down at all.  That's why I like all this old Gothic painting and building; in Gothic all the lines go upwards, right up to the very spire that points to heaven."

"In the old days people complained of young people breaking out because they were romantic.  But these young men break out because they are sordid; just prosaic and low, and wrangling about machinery and money-materialists.   They just want a world of atheists, that would soon be a world of apes."

Performing in the play 'Blondel the Troubadour,  makes the quiet antiquarian librarian Michael Herne undergo a tremendous life-altering experience and he refuses to change his costume for his normal clothes, and in fact he adopts a new persona that he didn't know was inside himself.
"No, I am never going to change."
After glaring a moment he went on "You all love change and live by change; but I shall never change. It was by change you fell; it is by the madness of change you go on falling.  You had your happy moment, when men were simple and sane and formal and as native to this earth as they can ever be.  You lost it; and even when you get it back for a moment, you have not the sense to keep it.  I shall never change."

..."I mean the old society was truthful and that you are in a tangle of lies," answered Herne.  "I don't mean that it was perfect or painless.  I mean that it called pain and imperfection by their names...but you dare not call anything by its own Christian name.  You defend every single thing by saying it is something else...It is all false and cowardly and shamefully full of shame.  Everything is prolonging its existence by denying that it exists."

"It seems to be a sign of education first to take a thing for granted and then to forget to see if it is still there.  Weapons are a very good working example.  The man says he won't go on wearing a sword because it is no longer any good against a gun.  Then he throws away all the guns as relics of barbarism; and then he is surprised when a barbarian sticks him through with a sword.  You say that pikes and halberds are not weapons against modern conditions.  I say pikes are excellent weapons against no pikes. You say it is all antiquated medieval armament.  But I put my money on men who make medieval armament against men who only disapprove of modern armament.  And what have any of these political parties ever done about armament except profess to disapprove of it?  They renounce it and neglect it and never think of the part it played in political history; and yet they go about with a vague security as if they were girt about with invisible guns that would go off at the first hint of danger.  They're doing what they always do; mixing up their Utopia that never comes with their old Victorian security that's already gone."
Yes, indeed...

So, a varied and interesting selection, and more book gatherings will be featured here as well, there have been many arrivals on many subjects.
Posted by Lori at 00:48 7 comments:

Huntingtower by John Buchan: A Wonderful Tale of Adventure 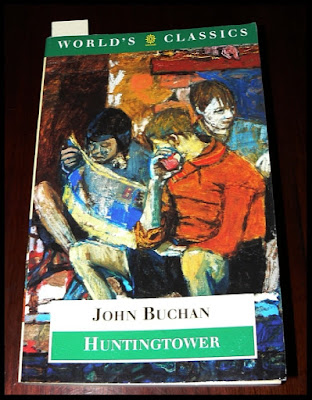 'Huntingtower' by John Buchan, from 1922.  I love this book, read it in 2015 and right away it became one of my all-time favourites. There is so much to enjoy in this book, such as the characters (some are wonderfully warm and noble, others are dastardly villains but of course one doesn't like them; the setting of the Scottish countryside; discovering what is behind the sinister goings-on; the bravery of the men and boys, all to be admired.
"Dickson McCunn, a respectable, newly retired grocer of romantic heart, plans a modest walking holiday in the hills of south-west Scotland.  He meets a young English poet and, contrary to his better sense, finds himself in the thick of a plot involving the kidnapping of a Russian princess, who is held prisoner in the rambling mansion, Huntingtower.  This modern fairytale is also a gripping adventure story, and in it Buchan introduces some of his best-loved characters, including the Gorbals Die-Hards, who reappear in later novels.  He also paints a remarkable picture of a man rejuvenated by joining much younger comrades in a challenging and often dangerous fight against tyranny and fear."
Buchan gives a lovely description of Dickson McCunn's imagination and inclinations at the start of this adventure:
"He had had a humdrum life since the day when he had first entered his uncle's shop with the hope of some day succeeding that honest grocer; but his feet had never strayed a yard from his sober rut.  But his mind, like the Dying Gladiator's, had been far away.  As a boy he had voyaged among books, and they had given him a world where he could shape his career according to his whimsical fancy.  Not that Mr McCunn was what is known as a great reader.  He read slowly and fastidiously, and sought in literature for one thing alone.  Sir Walter Scott had been his first guide, but he read the novels not for their insight into human character or for their historical pageantry, but because they gave him material wherewith to construct fantastic journeys.  It was the same with Dickens.  A lit tavern, a stagecoach, post-horses, the clack of hoofs on a frosty road, went to his head like wine.  He was a Jacobite not because he had any views on Divine Right, but because he had always before his eyes a picture of a knot of adventurers in cloaks, new landed from France among the western heather."
So this has been the man's life so far, a gentle, unexciting existence, but what adventure (and as yet undiscovered bravery) there is awaiting him in this ripping yarn!  Highly recommended.
There was a television adaptation of this made in the 1970s, along with some other Buchan stories, and I'm hoping that they will all be released on DVD sometime.  You can find this one on youtube, here is part one:
Posted by Lori at 00:28 No comments: