January: A Vintage Description of Nature In The English Countryside 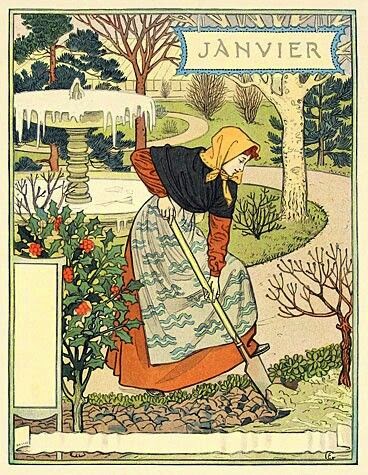 Although country folk say that the worst of winter is yet to come, the gorse on the moor has lighted a few golden lamps to greet the New Year.  And in the woodlands the hazel has hung grey tassels that tremble in the wind; about the keeper's cottage the jasmine displays points of yellow.  On the weathered wall, moss has woven a mosaic of green and brown.  In the churchyard ancient yews will soon open their curious clustered blossoms.
From a laneside elm, the mistlethrush utters his wild lay and, on days when an icy wind carries snow in his lap, the 'storm-cock' will sing his rattle song in defiance of the weather.  But the robin is more cautious, for when storms are near he sings in the open.  Thus, country lore gives to him the credit of being a weather prophet.
Down the lane a hedge-sparrow sings 'wee, sissy-weeso, wee, sissy-weeso.'  Another name for this bird is dunnock.  From the coppice a great- tit rings his repeated notes that remind one of a file on the teeth of a saw.  From the hedgerow a wren sounds his alarm, for this little brown bird delights to play the sentinel.

Over the wheat field a skylark plays his pipes of Pan.  On an average the lark sings throughout the year, except in August.  As a slant of sunshine touches the side of the wood, a green woodpecker becomes a jester with a laugh, and pigeons coo in contentment.   In the air hovers a kestrel, and the small birds vanish into the lattice of the hedges, and starlings deploy over the more distant fields.  From the oster-beds comes the wail of peewits.  Greenfinches, linnets, still keep together in flocks.  But the snow-buntings will begin to depart, as they are winter visitors.
The following birds may be heard in song this month:  Mistlethrush, thrush, blackbird, wren, robin, hedgesparrow, woodlark, chaffinch, and nuthatch.

When the winter sunshine gives a genial glow of warmth at the lane corner, one may glimpse the gnats in a crazy dance.  They revel in the amber light, and their rapidly vibrating wings reflect the transient gleam of rainbow colours.

The rabbits feed at the edge of the wood, and indulge in a gambol, but the hares seek the shelter of the hedgerow.  Dormice, hedgehogs, and squirrels are still sleeping.  The hedgehog is not worried by lack of food and sleeps on till the sun is sufficiently warm to lure him forth; but on a fine day the dormice and squirrels may awaken to visit their stores, and an occasional pipistrelle may be seen on the wing.   On the upland ridge, baby lambs bleat, and are answered by deep-voiced ewes.  As the twilight deepens, the shepherd lights his pipe, and watches the sunset behind a heavy bank of clouds, which he knows forecasts rain or snow.  Later a pale moon hangs above the hill, and the rugged form of the shepherd is silhouetted on the skyline.      (unknown author)
*Happy New Year and hello.  How remiss of me to go so long without posting here...I will try to do better...
Posted by Lori at 00:55 9 comments: